Serving Sarasota, Bradenton, and all of Southwest Florida

Dogs get difficult when they reach adolescence, just like human teenagers 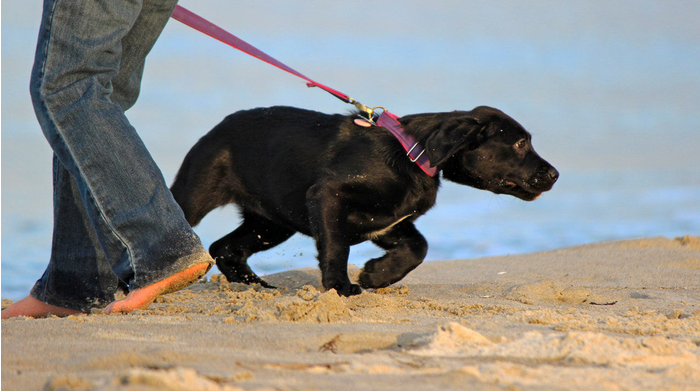 When our Scottish collie puppy reached doggie adolescence, she suddenly stopped obeying my commands. Previously, if I called “come,” Annie would fly across our yard to my arms. Now, the 8-month-old gave me a defiant “make me” look and ran the other way.

Our dog trainer advised us to stop fretting. “She’s a teenager,” she said. “She’ll grow out of it.” Now, a new study is backing that up: Dogs, it says, experience a hypersensitive period at the onset of puberty that makes them act out, just like human teenagers.

“There is abundant folk knowledge … that the behavior of adolescents differs from younger or older dogs,” says Barbara Smuts, a behavioral ecologist at the University of Michigan, Ann Arbor, who was not involved in the research. This “very welcome” study, she says, is the first to back that up.

Puppies bond with humans much as children do. “But owners often feel like they’re failing when their puppies reach adolescence,” about 8 months for most dogs, says Lucy Asher, a behavioral ethologist at Newcastle University and lead author of the new study, out today in Biology Letters. Like teenagers—whose bodies flood with hormones and whose brains are rewired during puberty—adolescent dogs can disregard and disobey their owners.

And owners respond in many ways, Asher says. Some punish their pups, some ignore them, and some even send them away. Indeed, teenage dogs are the most likely age group to land in U.S. shelters.

To see exactly how puberty changes dog behavior, Asher and her team monitored 70 female German shepherds, golden retrievers, and Labrador retrievers being raised as potential guide dogs. They asked caregivers to score the puppies on their attachment and attention-seeking behaviors—such as sitting very close to their owner or displaying a particularly strong bond for one person—as well as on separation-related behaviors like shivering or trembling when left behind. Both types of behaviors indicate general anxiety and fearfulness.

Dogs with high scores on either scale entered puberty earlier—at about 5 months, compared with 8 months for those with lower scores. Multiple factors cause human teenage girls with poor parental relationships to also enter puberty at a younger age. Thus, similar to humans, dogs that have fraught relationships with their caregivers see shifts in their reproductive development.

That’s a “striking” finding, Smuts says. Further, adolescent dogs that were stressed by separation from their caregiver were also increasingly disobedient to that person, but not others—again, mirroring the insecurity of human teenagers.

To test obedience, the scientists assessed a separate group of 69 guide dogs, first at 5 months and later at 8 months. They asked the dog’s caregiver and a stranger to give the command to “sit.” All of the preadolescent pups quickly sat for both people, but when the same pups reached adolescence many “repeatedly” refused to follow the order from their caregiver. However, they readily—and annoyingly—obeyed the stranger. Dogs that weren’t securely attached to their caregivers were even more willing to follow the stranger’s dictates—again, much like human teenagers.

The pooch teenage phase seems to be transitory. Using data collected from a study of 285 guide dogs, the researchers found that preadolescent and postadolescent dogs seem to be more “trainable” than teenage pooches.

Because of the similarity between adolescent pups and humans, dogs could serve as a model species for studying puberty in humans, the scientists say. And on a more practical note, the temporary nature of dog disobedience might make us worry less when our pups suddenly get minds of their own. Just ask Annie—she’s now happy to come, sit, and stay a while.